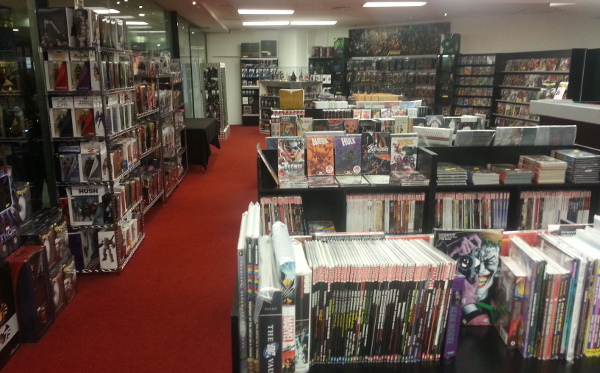 Readers Den Comic Shop is a specialist comic book store located in Cape Town, South Africa. There are 2 branches, the flagship Claremont store in the southern suburbs, and the Tyger valley store in the northern suburbs. The business is owned and managed by two brothers, Nizar and Mahdi Abrahams, who are both avid enthusiasts of the products they sell.

Readers Den Comic Shop specialises in the latest imported comics, graphic novels, manga, comic supplies, back issue & vintage comics, action figures, statues, posters, as well as a vast array of pop culture products and merchandise. All products are available in our 2 Cape Town stores and are in stock and ready for immediate shipping to online customers.

Readers Den Comic Shop began as a used books stand at Green Point flea market in the early 1990s, and back issue comics were soon added, which found an enthusiastic response.

In July 1992 a small shop at the top of Long Street was opened. After numerous requests, new comics from the USA were imported. The tiny premises was quickly outgrown, and in early 1994, a bigger shop closer to the heart of Long Street was established. Throughout the 1990s the back issue comics inventory was expanded, and the rapidly growing graphic novel format was added. By the end of the decade , the product line was further expanded to include manga and action figures. In 1999 a rudimentary website was built to complement the store, soon to be followed by an e-mail newsletter, alerting customers to the arrival of new shipments.

2002 turned out to be a banner year – the store hosted the first annual festive event, Free Comic Book Day, the owners visited the biggest comic convention held in the United States – San Diego Comic Con International – and moved the shop to its current premises in Claremont. During the next few years the new product lines were consolidated, Japanese manga became a huge part of the market, action figures and statues developed into a niche of its own, and graphic novels boomed, becoming the most significant format for the comics medium. Beginning in 2006, Readers Den exhibited at the annual Cape Town Book Fair, marketing graphic novels to a brand new audience. To accommodate customers from all over South Africa, the website was converted into a fully functional e-commerce website in 2010. 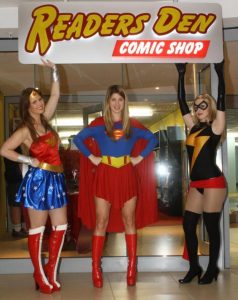 2012 saw another expansion, with a second location opened in the northern suburbs of Cape Town, in Tyger Valley Centre. This outlet now serves our growing customer base in the north.

The Claremont store relocated within the same building but to a much larger premises in 2015. This expansion saw a doubling of the actual retail space as well as increased office and storage area for the business.